Marriages are never easy and whether we like it or not, stress will find its way into even the healthiest of relationships. Traumatic life events and even everyday challenges can often cause imbalances in a relationship, leading to marital issues and eventually divorce. Being aware of these factors and knowing how to spot any red flags when they arise can be essential when determining whether or not a problem exists. 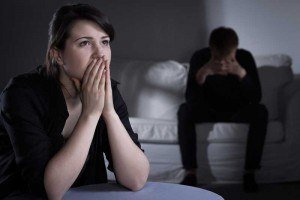 While there are countless reasons why couples decide to separate, the following five are some of the most reported factors contributing to divorce:

Being separated can take its toll on any relationship, and marriages are no exception. Studies show that living apart, be it due to careers or familial obligations, can leave couples doubting the strength of the relationship. When compared to their civilian counterparts, military couples especially tend to experience an increase in marital strife when separated by deployments, relocations, and the like. In these types of cases, there are often a lot of other contributing factors as well, such as stress, PTSD, and other issues that can arise both during deployments as well as after the homecoming.

It’s also important to note that not all couples who live apart will experience trouble. For some, distance is not an issue, and when both individuals have the same level of comfort with the arrangement, the result can be just fine. However, it’s not uncommon for living apart to raise questions of trust and fidelity, which can cause emotional separation as well as the obvious physical distance.

Unemployment or changes in an individual’s job situation is yet another common reason why couples eventually call it quits. According to a recent study performed by Ohio State University, men and women are more likely to leave their spouses when the man is unemployed. However, job loss is certainly not the only “change” that can cause issues.

In reality, any alteration in a couple’s financial situation or schedule can cause a problem which may lead to irreconcilable differences in the future. With each new job comes new responsibilities, and it’s all too common for jobs to become priority one while the marriage falls to the back burner.

Kids can be a big point of contention for many couples. Even for those spouses who agree on whether or not to have kids and how many kids they wish to have, the challenges are certainly far from over. The stress of caring for a newborn and for young children can leave quite a mark on a marriage. In fact, according to the Journal of Family Psychology, approximately 67 percent of all couples admitted a decline in their marital bliss within the first few years of their child’s life. The birth of a child and the readjusting to a new routine and schedule can be especially difficult for those parents who’re already prone to stress, anxiety, or depression.

Illness is yet another common cause for discord between spouses. When a spouse becomes sick, especially if the illness is a prolonged one, it’s often necessary for the other spouse to take on more responsibilities and ramp up their efforts in the relationship. From increased financial stress to the overall pain of it all, illness can have a wide and varied impact on the couple and their marriage.

There is some evidence that suggests that the sickness of a female spouse can have a more detrimental effect on the marriage. According to a study performed by Iowa State University, couples were six percent more likely to get divorced when the wife had a serious illness, such as heart disease or cancer.

Infidelity can have an enormous impact on any relationship, be the affair physical or emotional. While some couples are able to work through an affair and even use the incident as a catalyst for seeking the help they need, acts of betrayal such as these are often seen by the offended party as the “straw that broke the camel’s back”, leading the couple to divorce. In particular, affairs that have gone on for extended periods are often the hardest for couples to work past.