Even when parties reach agreements to most issues, if any remain then it is to be decided by the court, in a contested divorce trial.

Nevada is a “no-fault state”. This means that a spouse cannot prevent a divorce from going forward. The basic ground for divorce in Nevada is “incompatibility.” If one party refuses to comply, it advances to court trial for divorce.  Because Nevada is a no fault state, claims such as adultery or abuse and neglect cannot be utilized as grounds for divorce.

Although a divorce may begin as a “contested divorce,” agreements may be reached at anytime during the litigation process, rendering it “uncontested“. When a settlement is simply not possible, attorney Bruce Anderson is experienced in court trial for divorce litigation.

The Complex World of Contested Divorces

When two people who have been married for many years separate, things get messy. While Nevada is a no-fault divorce state, this certainly does not solve all the legal problems the newly separated parties will face. A contested divorce is one where there are issues that must be resolved and the parties are unable to reach a mutual agreement.There are 4 primary issues that are adjudicated through a contested divorce:1) A big issue in contested divorce is the division of assets and debts. Nevada law requires that most of the assets and debts that were acquired in the course of the marriage need to be split up.

2) Another heavily-debated concern in contested divorce cases is the payment of alimony. After a divorce, alimony is where one spouse must pay the other spouse as a means of financial support. Courts have wide attitude in determining whether to award alimony to a particular party or not.

3) Children are the result of many marriages, and as a result, each parent has a significant interest in being awarded custody rights. This is usually a bitter issue in a divorce because parents want to be able to spend time with their children. When determining child custody issues, the best interest of the child is the primary concern of the presiding judge. Although the popular trend is for the judge to grant both parents as much time with the children as possible, this will not be a feasible or desirable solution in some cases.

4) The last issue pertaining to children in contested divorces concerns child support. Under Nevada law, both parents are responsible for the financial costs of raising a child. Typically, however, only one parent makes child support payments while the other parent is usually the custodial parent and is the primary caretaker for the child. The total amount of child support payments the spouse must pay depends on a number of factors such as the parents’ monthly income, the particular custody arrangement, and the number of children. There are standard tables commonly employed to calculate child support payments, but it is in the court’s discretion to modify these payments. 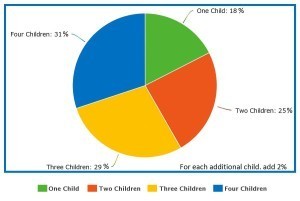 A contested divorce must be settled in court because the parties cannot agree on the issues. After the divorce proceedings are initiated, in most contested divorce cases, the parties are unable to reach a settlement. If this happens, as it frequently does, the divorce goes to trial. When the trial is over, the court issues a final order containing the judge’s decisions and findings, which marks the end of the divorce.

The law office of D. Bruce Anderson is committed to representing clients for fair and reasonable settlements when possible, saving clients a significant amount of money in extra fees. Attorney Anderson provides free telephone consultations to address your specific questions. He also provides an “in-office” consultation for $100. Request your consultation here or call our office directly to get started on your case.